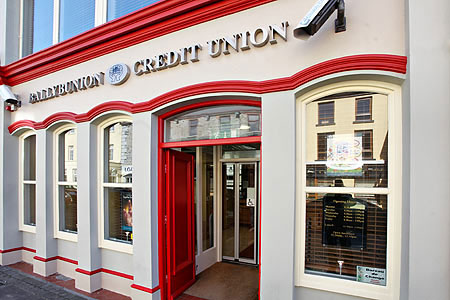 
The Credit Union idea was first brought to Ballybunion by the late Michael O'Halloran, who had seen a Credit Union operating elsewhere and had read up about it. He set up a study group in 1969 involving the late Dan Aherne, Mary Burke, Thomas Falvey and the late Mary Noonan.

You can pay all your bills in the Credit Union or transfer money directly into your bank account. The Credit Union offers a foreign exchange service and free life savings and loan protection insurance (terms and conditions apply).

The group spent 6 months working on plans for the Credit Union, which was still a new concept in Kerry in 1970. With the Credit Union up and running from 1970 onwards, it briefly operated out of the local boys school and later the kitchen of one of the supervisors until a suitable premises was found.

In the eighties the Credit Union managed to purchase their own premises in East End and in 2007 moved to a prime location in the Main Street of Ballybunion where it continues to operate today.