It was around the year 800 AD when a fleet of invading Viking Long-ships sailed along the coast of North Kerry and disembarked at Inis Labrinde, at the mouth of the Cashen river, beside Ballybunion. According to local legend a raiding party reached the old jail of Doon called Pookeenee Castle, where they came upon the nine daughters of the local Chieftain O' Connor.

There are two versions to the next part of the story; the first is that these daughters fell in love with the Viking warriors, and planned to elope with them and marry them. The second version sounds more plausible, and that is that the Vikings plotted to kidnap the daughters as their brides.

Whatever version is to be believed, the outcome was the same. O 'Connor found out about these plans, and one by one he lured each of his nine daughters to the chasm. Once there, he told them that a valuable torc (old celtic neck-band, usually made of precious metal) of his had fallen in, and wished them to retrieve it. As they went searching for this missing torc, O' Connor had them tossed into the chasm. O' Connor then beheaded all nine Viking warriors and had their remains thrown in with his daughters. The rest of this evil deed is history. To this day, this deep chasm is known as the Nine Daughters' Hole. 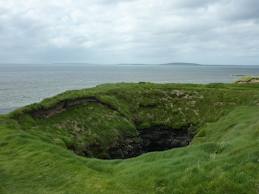