Did you know that the shillelagh, or Irish blackthorn walking stick, was actually a murderous weapon used in highly structured, regularly scheduled fights (called faction fights) between families, gangs, communities, and tribes, in which people – both men and women – fought to the death? Faction fighting was a phenomenon unique to 19th century Ireland. Factions were armies of country people, numbering hundreds or even thousands, armed with shillelaghs, stones, and, occasionally, with swords and guns. Their battle grounds were fair greens, market places, race courses and frequently streets of towns and villages. Many people were killed and scores wounded in the most famous encounters.

One of the most memorable faction fights took place on June 24, 1834, at Ballyeigh Strand, near Ballybunion, on the Feast Day of St. John the Baptist. This Holy Day traditionally served to commemorate the occurrence of the longest day of the year. Over 3,000 people, including the Coolens, Lawlors, Blacks and Mulvihills, went up against each other, and when the skirmish was over, 200 lay dead.

Anything could set off a faction fight; conflicts over non-payment of dowries, fights over succession to property, long-standing grudges or simple pushing and shoving at a previous fair. 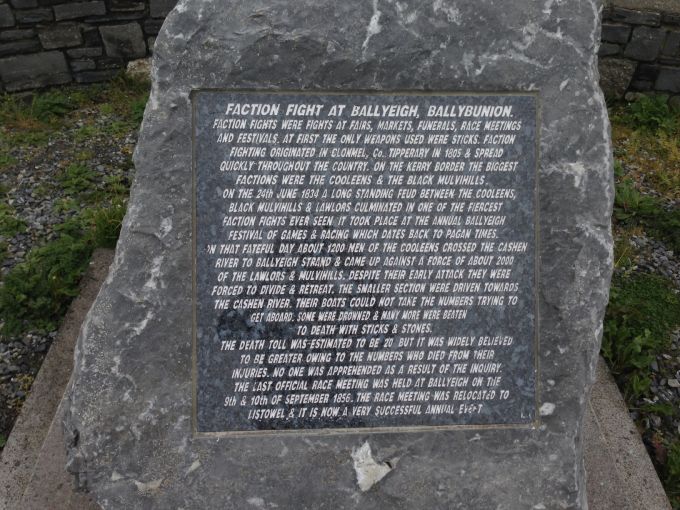