Pat earned his pocket money and learned his golf as a caddy. In 1965 at the age of 20 Ballybunion Golf Club gave him his first golf handicap of 10. He won the Ballybunion's Captain's prize that year and retained it the next year despite having his handicap cut to 6. In 1969 he successfully retained the Ballybunion Scratch Cup - but under the assumed name of "Sean Walsh" as he had difficulty getting off work so he phoned in sick and with the help of the Club Secretary / Manger Sean Walsh entered the Scratch Cup under Sean's name and retained it.
* In 1968 he won he won the first of his 72 International caps for Ireland.
* For many years he represented his club, province, and county with distinction.
* Won the East of Ireland for three consecutive years (1971-1973)
* Won the South of Ireland Championship in 1971
* Reached the quarter final of the British Amateur Championships
* Set an amateur course record of 67 for Ballybunion when winning the local Scratch Cup in 1969 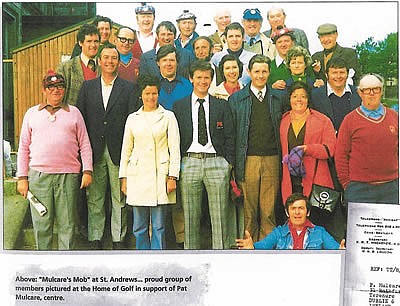 In May 1975 he reached the pinnacle of his career when represented Britain and Ireland in the Walker cup match against the USA in St Andrews on the Old Course. One of his team mates was Ryder Cup captain Mark James

In the  Ryder Cup singles matches he beat Dick Siderowf - twice winner of the British Amateur Championship. He went down 4 & 3 to Curtis Strange who then went on to win Major Honors in the world of golf. In the doubles he partnered Ian Hutcheon of Scotland to beat Dick Siderowf and Jerry Pate. For the record, the USA won 15.5 to 8.5 and our Pat Mulcare won two points of this total. He has gone on to earn himself great honors in the world of golf.