The name of the late Seán Walsh is synonymous with golf in Ballybunion following a lifetime of involvement with the club as both player and administrator.

Seán joined in the club in 1952 when an injury ended his football career and he took to the game immediately, achieving a single digit handicap in his first year.

He became involved with the club at committee level some four years later and in 1959 became the club’s youngest –ever captain at the tender age of 26, a record which lasts to this day.

Following his term as captain, he served as the club’s Honorary Secretary throughout the 1960’s whilst finding time to represent the club at both Senior Cup and Barton Shield off a handicap of four. He would go on to win the All-Ireland Jimmy Bruen Shield in 1979 his only national title with the club.

When the club’s Secretary-Manager Commandant Ted Brick announced his departure in late 1970 Seán applied for the position and took up the post on January 1st 1971.

It was to be a baptism of fire as the club was about to undergo major changes with the re-routing of the holes and the relocation to a new clubhouse further down Sandhill Road, as well as the hosting of the Irish Close Championship, all in the first five months of his tenure.

The constant threat of coastal erosion was to be Sean’s next major task and in 1977 along with club Captain Jackie Hourigan, he launched the “Save Ballybunion Golf Links Fund”, a national and international fund-raising campaign to help fund the club’s battle with the Atlantic Ocean.

Part of this campaign was the introduction of Life Membership of the club which proved to be very popular indeed and brought in the necessary monies to fund the huge protection campaign and the installation of the gabions.

Seán was once again instrumental in securing the Irish Professional Championship for the club in 1978 but in 1980 he pulled off arguably his greatest ever coup when through his contacts in the game, he personally secured for Ballybunion the international match between the Golf Writers of the USA and the Golf Writers of Great Britain & Ireland.

The “Ryder Cup” style match resulted in every major golf writer in the world arriving in Ballybunion for a week and the publicity it generated, was the launching pad for Ballybunion as a major golf tourism destination. 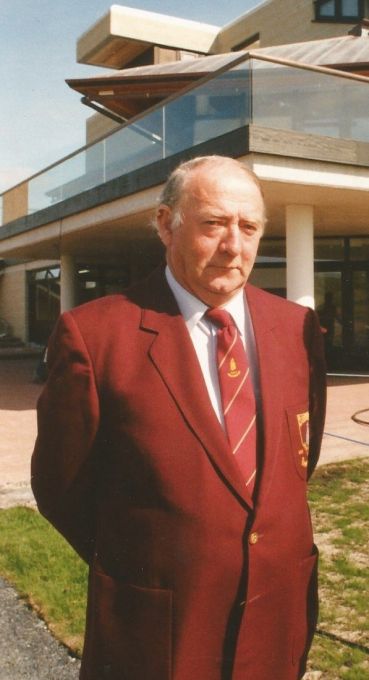 The following year through his friendship with former USGA President Sandy Tatum, Sean invited the legendary Tom Watson to play Ballybunion en route to the British Open at Royal St Georges and so began the love affair between the eight-time major winner Watson and Ballybunion which was to result in a major boost to green fee revenue, something the club still benefits from to this day.

Watson and Seán became close personal friends and as a result, Seán was on hand to welcome to Ballybunion several other legendary golfing figures over the next number of years including Jack Nicklaus, Byron Nelson, Lee Trevino and five times Open Champion Peter Thompson.

In the mid-eighties, Sean along with other officers of the club travelled to the USA to launch the Overseas Life Membership campaign which was most successful and as a result of this trip, the friendship that Ballybunion still enjoys with Pine Valley was born.

Having reached the age of sixty in late 1992, Sean decided to retire and received the ultimate honour from the members at the AGM when he was elected an Honorary Life Member for his services to the club.

On top of that, he was also nominated to serve as Club Captain for the club’s Centenary Year in 1993.

Following a most successful tenure as Captain, Sean wasn’t quite finished yet and went on to start up the Seniors events  at Ballybunion which he ran up to the time of his untimely death in March of 2000, just three months before the club was to host the Irish Open.

A pioneer of golf tourism not only in Kerry but in Ireland, Seán’s legacy to Ballybunion is ever lasting and he thoroughly deserves the title of “Local Legend”.